This morning, as I was clearing the counter off, I asked Rick while picking up random items, “Is this trash?”  (It’s super weird the things that AREN’T trash, so I’ve learned to ask.)  Anyway, today, he says, “I always write trash on items that are trash.  If it isn’t marked, it isn’t trash.”  Obviously, I don’t have to tell you that this idea would be absolutely ridiculous.  Choosing to write “trash” on something takes more time than throwing the trash in…the trash-but Rick is a man of his word.  I watched him from the living room as he finished the last of the milk, opened the drawer, pulled out a permanent marker, and wrote “TRASH” on the milk jug, setting it back on the counter.  All while complaining that it’s not easy that he has to write “trash” on all of his trash.  I guess the point of this little story is to let you know that my husband is weird.  Like…really weird.  He’s so weird that I am in awe of the creativity required to carry out this weirdness in a hilarious manner.

Even when we argue, he’s funny.  Sometimes, it’s incredibly annoying.  Like, when we have an argument and I want to be angry at him and not talk to him and make him feel so terrible for making me not talk to him, and then he says something so stupidly, self-deprecatingly, funny that I can’t help but smile.  Then, I’m even more angry.  I’m so angry at him for making me smile.  A few minutes later, we talk things out (or just let it go) and everything is fine.

Sometimes, I reflect on the past and compare it to my present.  It’s not that I sit around thinking about ex boyfriends all the time, but I think it’s important to recognize how you got to where you are.  My former relationships have changed me into the wife I am today.  I’ve learned what I don’t want in a relationship, and who I want to be in a relationship.  I’ve learned to forgive AND forget.  I’ve hurt people, and while I regret hurting them, I wonder if I hadn’t, would I ever have learned to be better?  Would I feel like I deserve my weird, hilarious husband?  I don’t know.

These little moments of looking back are always brought on by being grateful for my marriage.  It isn’t a perfect Instagram marriage, but it’s ours and I’m proud of it.  This weekend, Rick and I went to Disney without the baby.  I can’t tell you how many people said, ” YOU AREN’T TAKING JACK!?”  Nope.  We did not take our child to Disney World this year, and guess what?  We will probably go to Disney World again without our son because sometimes, we need to be children.  We need to put on mouse ears and make weird videos and eat expensive African food and fight Darth Vader all by ourselves.

When I was a little girl, if someone were to ask me what kind of man I was going to marry, I would have said that he should be funny, smart, handsome, and love Disney World-and whatyaknow?  I got one.  It’s not just Disney.  It’s experiences.  I’ve always been an experience kind of person.  I like to try new things.  I like to be outdoors. *Disclaimer: Do not confuse being outdoors with being athletic.* I like to travel and learn weird facts about places no one knows about.  And so does Rick.  Even our honeymoon was a little different than most.  We went to Breckenridge, Colorado.  It is a ski town that doesn’t have much tourism in the summer.  We went in June.  It was amazing.  We had no plans at all.  We just went and did whatever we felt like doing.  We found some trails online and ended up hiking to a beautiful lake surrounded by snow capped mountains where NOBODY else was.  Rick had to push my sea-level accustomed body up the mountain.  I could barely breathe at that altitude, but once we got there I felt like the luckiest person alive. 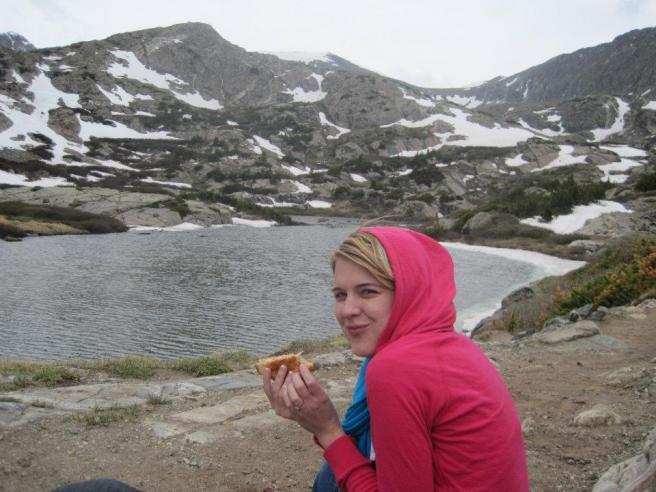 At Disney this weekend, I missed Jack so much.  Rick and I saw so many things that we knew Jack would love, especially the big “ball” at Epcot.  We enjoyed picking out gifts to bring home to him, but we also enjoyed being without him, and I think that is something that is even more important than actually taking Jack to Disney World.  To have parents who want to do things without you (sometimes) is a wonderful thing.  I love planning things for us to do as a family, but I also love planning trips for just the two of us.  This fall, we are going to Europe together for the first time.  I already discovered this weekend that it is going to be HARD to leave our baby for over a week, but I cannot tell you how excited I am to go on this adventure with just Rick.  We will always make time for our son.  We will always make time for each other, and from experience, I can say, that this makes Jack a very lucky little boy-and me a very lucky girl.