Picture yourself in a small white house, in a pink room with white wicker furniture, lying on a bedspread covered in a signature 1990’s rose pattern.  You are 7 years old.  Your best friend can’t come over this weekend, you are sick of the same old toys, you’ve been staring at your ceiling fan for 20 minutes, and you are bored out of your little mind.  You walk into your parents’ room and desperately proclaimed, “I. Am. So. BORED!”

Then, she looks at you.  The classic Mom look, her gigantic glasses reflecting back at you with a confident smirk.  She knows exactly what to say.  “If you’re bored, I’m sure I can find something for you to do.” END_OF_DOCUMENT_TOKEN_TO_BE_REPLACED

My whole life, I knew I wanted a little girl.  She would have blonde hair and blue eyes just like me.  She’d be funny and sarcastic and she would LOVE The Little Mermaid.  (Narcissistic much?)  I think part of my girl-wanting was due to wishing I had a sister.  Obviously, I grew up and realized that children weren’t around specifically to entertain their parents, but still, I wanted a girl.  Even as a teenager, I’d see those adorable little dresses at Target and think, “One day.”   END_OF_DOCUMENT_TOKEN_TO_BE_REPLACED

This morning, as I was clearing the counter off, I asked Rick while picking up random items, “Is this trash?”  (It’s super weird the things that AREN’T trash, so I’ve learned to ask.)  Anyway, today, he says, “I always write trash on items that are trash.  If it isn’t marked, it isn’t trash.”  Obviously, I don’t have to tell you that this idea would be absolutely ridiculous.  Choosing to write “trash” on something takes more time than throwing the trash in…the trash-but Rick is a man of his word.  I watched him from the living room as he finished the last of the milk, opened the drawer, pulled out a permanent marker, and wrote “TRASH” on the milk jug, setting it back on the counter.  All while complaining that it’s not easy that he has to write “trash” on all of his trash.  I guess the point of this little story is to let you know that my husband is weird.  Like…really weird.  He’s so weird that I am in awe of the creativity required to carry out this weirdness in a hilarious manner.

END_OF_DOCUMENT_TOKEN_TO_BE_REPLACED

In case you missed the 291 photos I posted to Facebook of Jack’s 2nd birthday party, I’ll give you a little recap.  Jack turned two, and we had a Chugga Chugga TWO TWO party for him.  I know.  SO LAME.  My twenty two year old self is hardcore eye-rolling right now, but she also doesn’t have a beautiful munchkin nugget whose birth must be celebrated by the masses.  When deciding which theme to choose, I laid out options for Jack.  We were going to have a Ball Party or a Choo Choo Party or a SHOES Party.  In Jack’s very long two years, these are the things he holds most dear.  So, I put a ball, a shoe, and a choo choo on the floor in front of him and asked which one he wanted as his party theme.  I’ve already given away his decision.  He picked up the train and to Amazon Prime we went. END_OF_DOCUMENT_TOKEN_TO_BE_REPLACED 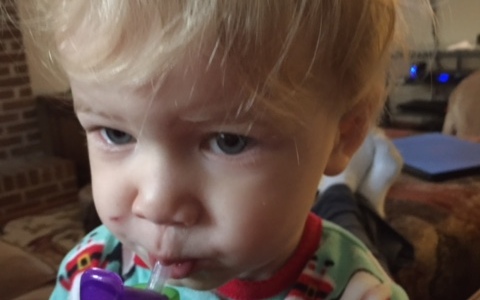 First of all, I’d like to apologize for being MIA the past month.  We have been moving and are still in the process of…you know…moving.  Also, if you haven’t noticed, we are right slam in the middle of the holiday season, so….back off!  Seriously though, I’m sorry.  Lucky for you, my husband wouldn’t get off my back about blogging so here we are.  While much has happened in the past month, I am currently in the mood to enjoy a good therapy post about my baby’s newest milestone.  THROWING AN EMBARRASSINGLY, LOUD, OBNOXIOUS, PHYSICALLY HARMFUL FIT IN A PUBLIC PLACE. END_OF_DOCUMENT_TOKEN_TO_BE_REPLACED

As I am writing this, my little angel dumplin’ is chillin’ in his crib, singing happy songs about how much he loves his mother because of my undying affection for him.  He is holding his Momo blankie and thinking of all the fun times he had with me today. Like when he threw that soup can at my head.  Or when he picked up a baseball bat and hit me as hard as he could.  Or, here is the best part, when he grabbed a glass bowl that I was eating from and hit me directly in the nose and I seriously thought it was broken.  His favorite part of the day, I’m sure, is laughing at me as I tried to get him to stay in “the time out corner”.  This escape from baby prison game is THE BEST!  You know how psychopaths on TV like to smile as they’re about to torture their victims?  Well, I think my baby might be a psychopath.  This brings me to a quick flashback story.  It’s the reason I’m here-in this amazing situation.  It’s the reason for my punishment. END_OF_DOCUMENT_TOKEN_TO_BE_REPLACED

After hearing myself say to my son, “No.  We don’t put our hand in the dog’s butt.” and posting said statement on Facebook, I was inspired by my friend Amber to figure out a way to help toddlers answer the more difficult questions in life.  Often, when saying to Jack, “Don’t lick that!” or “We don’t show our belly button to total strangers, darling.”, he has a very confused expression on his face.  So, after way too much time figuring out how to create flowcharts on free online software, I give you: Flowcharts for Toddlers.  The following should be helpful for your child when a challenging situation arises.  Good luck!

END_OF_DOCUMENT_TOKEN_TO_BE_REPLACED

The Munchkin Nugget
Create a free website or blog at WordPress.com.