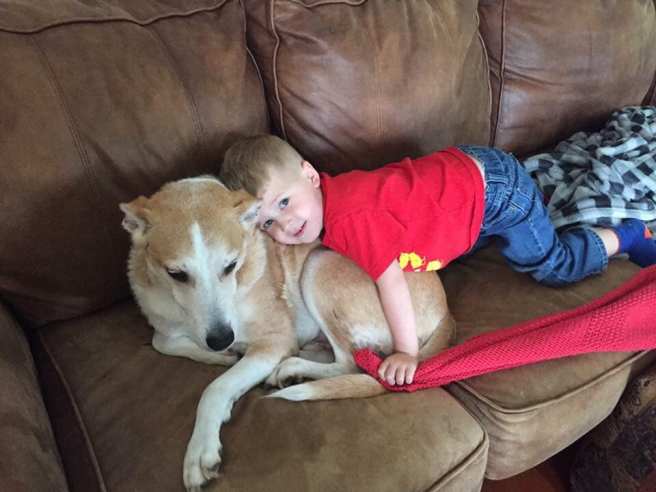 “Why are we here and Hobbes is in Heaven?  Why do we have to go to school and boys and girls in Heaven don’t? Why are we here if the Earth is not that great and Heaven is perfect?” my five year old son asks me with tears in his eyes.  I would usually say he was doing his usual bedtime filibuster, but we did just lose our precious dog, Hobbes, a little over a month ago.  The terrible understanding that death is permanent has hit Jack earlier than I had hoped.

I remember realizing somewhere around his age that everyone was going to die, even me.  I would close my eyes before bed and picture each of my grandparents and decide which one I was going to lose first.  Then, I would try to figure out how I was going to heal the heart of the grandparent they left behind.  I had forgotten this though.  Until my little boy asked me some incredibly difficult questions, I had forgotten that first sharpness of death.  I was telling my father this yesterday and he reminded me that as a young girl I had asked him why in the world we were wasting our time learning math when we’re all going to die one day.  Good point, little Becca.  Good point.

Well, good Lord, kid.  I don’t know!  What’s the point?  What’s our purpose?  THIS IS SO DUMB!  We all have our little plywood houses and our little families and our little laptops and we’re planning vacations and working and adopting animals and commuting and gossiping and judging and being obnoxious to each other over political disagreements and what. is. the. point?

Okay.  Did not say that to five year old.  Instead, I said Hobbes is waiting for us in Heaven and we will see him one day and if Jack went to Heaven I wouldn’t be there yet and it would make me very very sad.  THEN, I reached out to my friend Julia who is a children’s minister.  To sum it up, she says we are here to show God’s love to others so that they may know Him through us.  That sounds pretty good.  And whether you believe in a higher power or not, it definitely sums up a purpose.  Bringing love and goodness to others is how I gain fulfillment and how I can enjoy life on this crazy earth without being angry that I am not in eternal paradise with my dead grandparents and pets.

What I cannot yet explain to Jack is that death is a part of life.  It is painful and sometimes it is beautifully painful.  Hobbes dying was so, so painful for all of us. But Hobbes’ life was worth that pain.  Hobbes lived a good life because we were here (ON EARTH JACK!).  We were here to give him the love he needed.  If we were in Heaven, who knows what would have happened to Hobbes?  Hobbes is the reason we want more animals to adopt.  If he stayed here forever, we wouldn’t have room for future pets who need us.

I think God does take us home when we’ve served our purpose.  Not that when he takes some people earlier than expected that they weren’t purposeful, but maybe the people left behind for some reason are supposed to have a new path without them. A reason we don’t yet understand.  I also think that if we lived here forever, we would be asking the exact same questions.  If we are here on earth forever, what’s the point?  What’s the point of trying if I’m going to be here forever anyway?  Where’s the goal?  I have no deadline (pun intended).  I have all the time in the world to make up with that person or go visit this person.  Wouldn’t we all take each other a little less seriously if we had all the time in the world?  I don’t know.

I do know that the lives and deaths of those who I love have impacted me in the best of ways.  The people who have left me have molded me into a better person and the pain it inflicted has only made me more empathetic to others and more appreciative of those I still have with me.  It’s hard, though, explaining that to a child.  Not to a degree in which he can really understand.  It is so based on personal experience and growth. I try to explain how the pain will get easier, but he doesn’t believe me because he has never experienced this.  He doesn’t understand that grief comes in waves that get further and further apart because this is his first time in rough waters.

One thing I wouldn’t dare try to explain to him is that I am grateful for his pain.  He cannot escape it and to be so lucky to have his first tragedy be his beloved dog is such a blessing.  Already, I have noticed him taking the time to pet our other dog, Heidi, more often and tell her she is a good girl.  It’s hit him in a positive way and he doesn’t even know it.  He is already a better human being because of it.  The only way you can escape grief is to choose not to love anyone and I want Jack to learn that love is always worth the heartache.  Grief is love in its most intense form.  It reminds us that life is short and the hiccups don’t really matter.  If they don’t matter, then what’s the point?  I don’t know, baby.  I really don’t.  But I think it might be really simple.  I think it might just be to love and be loved.

One thought on “The Point”