So, remember a week or so ago when I told you about my weird day leading me to my grandparents’ old house and then to their graves?  And remember when the really nice people who own it now, Tami and Patrick, invited me to come see it?  Well, today was the day!  My dad and I, along with my mom and stepdad swung by the old place today where we were graciously welcomed by the “new” homeowners.  They’ve actually owned the house for three years now, so while it isn’t new for them anymore, being there without my grandparents was very, very new.  The main word that comes to mind when I think of our visit today is closure.  I was worried I’d leave their home with sad memories, but instead I felt overjoyed.  Let me tell you why….

THE POOL IS OPEN!  I didn’t take any pictures of it, but last time I was in that pool, I was shooting a paint gun at the empty dirty walls of it.  Papa had stopped keeping up with it when he reached 85 or so. I learned to swim in that pool.  My parents had parties at that pool as teenagers.  Tami and Patrick’s adorable (GIANT) dog Frank even took a swim while we were there.  It was magical to see it open again, remembering homemade peach ice cream and watermelon (before I was allergic to it and hated it’s stupid red guts).  It was nice to talk to Tami and Patrick about the giant graveyard grasshoppers I used to chase growing up-and even though it’s creepy that they live in areas near graveyards, it’s nice to know they’re still around.

SOME THINGS HAVE CHANGED SO MUCH!  Walls painted.  Foreign furniture.  They even removed all the carpeting revealing perfectly preserved hardwoods: 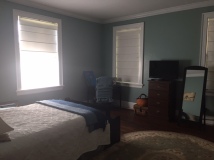 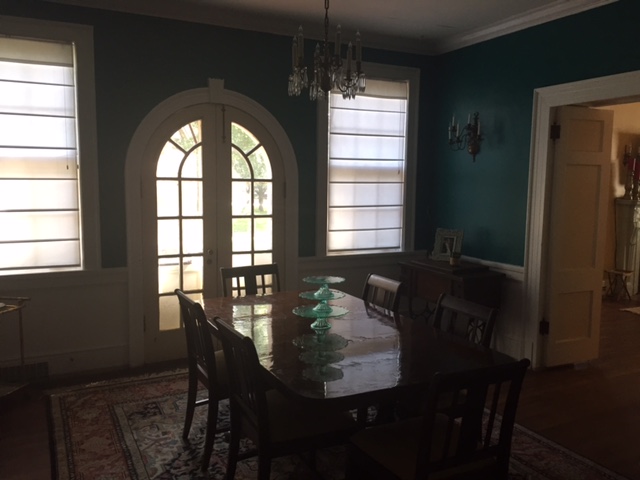 This next room used to be my grandparents’ den.  It was very small and being old school, they had a den and a “DON’T EVER TOUCH ANYTHING IN THIS ROOM OR I WILL KILL YOU” living room.  The den was so small.  The door leading outside was blocked by Grandbetty’s chair where she would sit and peel oranges or do crossword puzzles.  Papa’s couch was against the wall with a large side table, holding his artificially sweetened ice tea, glasses, and the remote, his wallet hidden beneath. They watched Wheel of Fortune here, saving recorded episodes via VHS for us to play as a family when we visited.  This was also where I took all my naps into my twenties, on the love seat against the china closet.  It is now a foyer.  The door is easily accessible and the owners use it to go in and out instead of the kitchen door I knew so well.  It makes so much sense this way…. 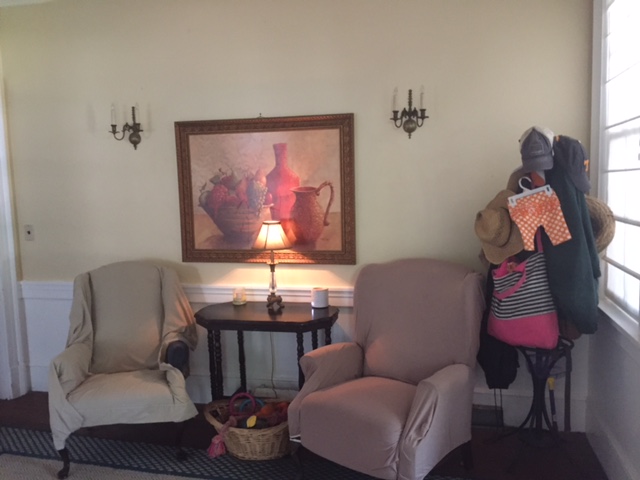 Side note: The owners cover their furniture because of their dog.  There are nice chairs underneath those covers.  I think they would want you to know that.

SO MUCH IS THE SAME!  In my head, the entire house would look so completely different that I would barely recognize it.  I’m not sure why I thought this.  There is NO WAY Rick and I would totally transform a house in three years.  We’ve owned ours for a year and have yet to replace the countertops and we’ve only painted one room.  When I walked into the kitchen, not only did it look EXACTLY THE SAME, but there-in the middle-was my grandparents tables and chairs!  The table where I played twelve thousand games of Gin Rummy and Shanghai.  The table where I ate my ice cream soup, homemade popcorn, and cheese toast.  The fridge was still there-I wanted so badly to open it up and find Papa’s homemade rock hard frozen brownies and pickled cucumbers.  The only thing this kitchen was missing was a Mary Engelbreit calendar and a giant fork and spoon on the wall.  I LOST IT.

Luckily, this was toward the beginning of the visit, so I got that right out of the way.  After I collected myself, I noticed another fascinating tidbit.  The phone!  My grandfather had written down my number on top of the phone in case they needed to reach me, and yall, IT WAS STILL THERE!  I have never been so happy in all my life.  There it was.  His phone.  His handwriting.  My name.  My number.  And these owners LEFT IT THERE-because they’re amazing.  Tami even offered to give me the phone, but I am so happy that it’s still there-right where it belongs. I don’t want it to move.

The sunroom still has a lamp in it Grandbetty and Papa had from the Phillipines.

Also, a tiffany lamp my dad and Grandbetty had carried from Mexico into the U.S.  I forgot to ask about this story, but I’m assuming it had something to do with their time in Arizona.  Grandbetty and I (and other members of the family, especially Aunt Gay) put jigsaw puzzles together in this room.  I also spent many hours here listening to old records on their victrola, which I now own.

Upstairs, which used to be full of beds for Grandbetty and Papa’s large family, is now a party room.  It still smelled the same and looked the same, minus the beds and furniture. Patrick is musical and uses the stage upstairs (that Sarah and I used to “perform” on) to entertain with his band-that may or may not still be together.

As we went to the last place, I prayed silently.  “Please still be there. Please still be there.” Patrick must have read my mind because when I asked to see the basement he said, “It’s still there!”  And it was.  THE WALL.  THE WALL WITH OUR HEIGHTS.  THE WALL WITH EVERY FAMILY MEMBER’S HEIGHTS THAT GRANDBETTY WOULD MAKE US STAND IN FRONT OF EVERY FEW YEARS.  I loved these people before, but I wanted to give them a million dollars.  From Papa’s writing to Grandbetty’s.  OH MY GOSH THIS IS THE BEST MOMENT OF MY LIFE.

And our favorite part is when Grandbetty stopped measuring my dad.  If you look closely through the crackling paint, you can still see her hilariously documenting that “Bill stopped growing.” 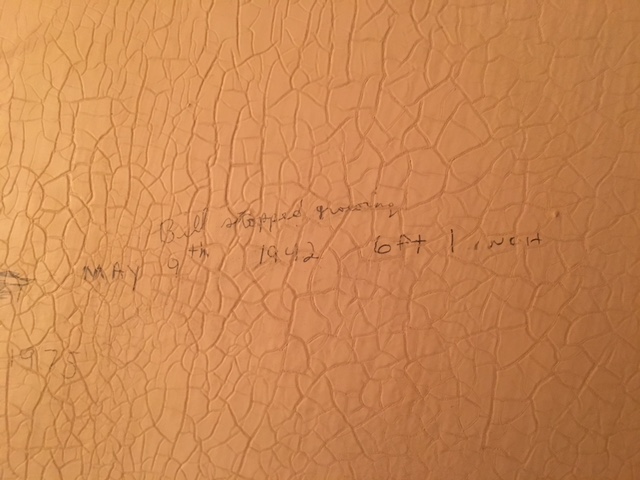 I cannot put into words how good this was for my soul.  These folks are so friendly.  They utilize the home in every possible way.  They are smart and creative and they just belong here.  Patrick even told me he had MET my Papa years ago when he was doing some electrical work at the pool house.  Neither of them knew that one day, Papa’s home would be Patrick’s and Tami’s-but I am so glad it is.  My worst fear was that their home would go into a state of disrepair, but it seems it’s new life is just beginning.