And by bitches, I mean incredibly aggressive Pitbulls and their drunkenly idiotic owners who allow their dog to drag them all over the beach and attempt to eat small, innocent terrier puppies-but we’ll get to that later.  Last weekend, I went to the beach with four of my closest friends.  This is our second annual chill trip. There are certain requirements to attend this special event.  You must be incredibly passionate about three things:  Eating, laughing, and doing absolutely nothing.  Oh my gosh, ya’ll.  I am SO good at doing nothing.

I’d like to introduce you to four of my favorite slugs through stories of this weekend.  First, Kristen.  Kristen is my cat.  She’s not really a cat.  She’s a person.  A girl with (at the moment) bleach blonde hair and dark eyebrows who looks JUST like the Mother of Dragons on Game of Thrones.  I don’t know her name.  Sycre?  Sirsee?  Simba?  Anyway,  Kristen is my cat.  We met several years ago and I slowly got her to grow to trust me and even like me a little bit.  Sometimes, I feed her so she’ll stay longer.  That weekend, my cat Kristen and the rest of the #bustedbiscuits gang ate 300% more than a full serving of: pimento cheese, egg salad, breakfast casserole, shrimp alfredo, corn dip, bagels, ribs, twice baked potatoes, ice cream, fruit trays, veggie trays, cheese toast, muffins, cookies, cheese and crackers, pickle rolls, ice cream, milkyways, kit kats, and a partridge in a pear tree.

There was a point that we literally couldn’t move.  We were all sitting on the porch like pregnant dogs-panting in our flowered lounge chairs.  I had to change into yoga pants to avoid over stretching my jeans and breaking a button.  I was a can of biscuits-and I was about to bust.  I finally worked up the most effort I could muster-which was still minimal per girls’ trip protocol-to get up and go change.  “WATER!”  Maggie yelled.  She had just been sitting there waiting for someone to go get something so she could ask them to get her something so she wouldn’t have to move.  Maggie and I are more like sisters than friends and have always been competitive in waiting eachother out.  She won this time, but soon she would have to use the bathroom and I would have a list of needs ready to shout out in my head. The others followed suit and shouted their wishes which were almost always food or drink.

Our friend Jen joined us for the first time this year.  When discussing who to add to our list of chizzillies, Jen immediately came to mind.  She is the definition of chill, and she is unintentionally one of the funniest people I’ve ever met.  She could read me a car manual and I’d be entertained.  Jen drove separately from us and arrived a few minutes before.  Sitting on the steps of the garage, she waited patiently.  Out of the corner of her eye, she saw two dark figures.  They were snakes, and they were slowly creeping towards her.  Being a Florida native, Jen jumped up to scare them away.  These snakes weren’t even playin’ with Jen.  Their heads popped up like “BRING IT!” as they raced towards her.  She darted towards the car, and as we pulled in the drive way, she warned us through googly eyes and intense pointing that the enemy was near.  We watched as the scaly miscreants darted under the front porch.

Megan is probably the only reason any of us actually did anything.  She forced me to rent bicycles, have a picnic on the beach, get ice cream, and walk all the way back to the beach house from town.  I’ve gone to St George Island for pretty much my entire life and have never walked all the way home.  The thing about Megan is, she really doesn’t care what you do.  She does what she wants, and she’s happy if you participate, but totally cool if you don’t.  I wanted to nap, and Megan happily reminded me that I would really enjoy going to town with her and Kristen.

When the three of us had finished riding our bikes, we sat on the beach and ate muffins and cookies before walking back to the house.  There was a very nice family sitting next to us with a small terrier and three children playing in the sand.  This woman, who looks like she religiously purchases everything from the Martha Stewart collection, is walking her gorgeous Pitbull.  Well…the Pitbull was walking her.  Dragging her.  We made fun of her a bit as the dog brought her towards the water, but then he started walking towards the family. Towards the terrier.  “He’s a nice dog!” she said bubbly, “Can he come meet your dog?”  The dog was literally foaming at the mouth, her entire body pointed at the terrier like he was looking at a filet mignon.  The terrier was obviously nervous.  There was nothing nice about this situation.  Also, she was on a retractable leash and her collar was not tight around the neck.  The family was way nicer than I would have been.  Cautiously saying, “No.  We don’t want to chance it.  Have a nice day.”  The lady tried to leave, but the dog kept her there.  She didn’t even tug at him.  She just stayed there, smiling like an idiot, as the dog inched closer and closer to the family.  For five minutes (and I promise I’m not exaggerating), she stood there staring at the family with her dog.  A young man walks up and tries to help her.  She denies him saying, “I think you’ve had too much to drink.”  Uh.  No, lady.  I think you’ve taken too many Xanax.  Your dog is about to eat another dog….or a child.  We make a game plan.  If he attacks the dog, we run and call 911, if he attacks a person, we all hit him in the head at the same time.  It was seriously a scary moment as she had no control over this animal.(Side note: I love all animals and would hate to hurt a dog, but people are more important.)  Finally, Megan gets up and goes over to the dog.  The family, mind you, is still being unbelievably nice to this woman.  “GIT!”  Megan yells clapping at the dog and her owner.  “GO ON!  GIT! GIT OUTTA HERE!”  The woman looks awkwardly at Megan.  “You too, Honey.  Ya’ll need to go.”  The woman tried to let her dog take her further down the beach, but Megan clapped the two of them all the way down the boardwalk and towards the parking lot.  This is why I love her.

My friends are all different, but they all hold a special role in my life.  They all have unique qualities that make me want to be more.  More outgoing, more into music and books, more into cooking and writing, and just a better person in general.  They are the people I need to motivate me to come back from a vacation and do life just a little better than I did before. They are my slugs.  They are my busted biscuits.  They are my friends.  Until next year girls, cheers! 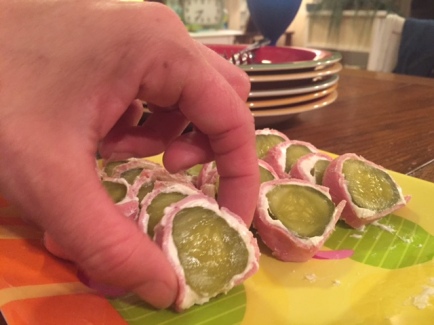 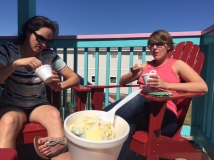 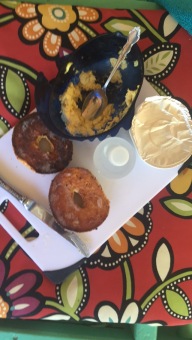